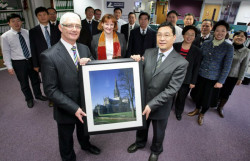 A party of 20 officials from the Chinese Government has called on the Property Ombudsman, Christopher Hamer, as part a fact-finding tour of the UK.

The visit by senior staff from the Department of Letters and Calls was organised by the Chinese foreign affairs department and formed part of a programme to review complaints handling and dispute resolution procedures within the UK.

After a presentation from Mr Hamer, followed by a question and answer session, the delegates toured the TPO head office at Milford House, Milford Street, Salisbury, before an exchange of gifts took place.

'As China moves towards a more consumer-focused society, so the Government there wants to find more informed ways of dealing with consumer disputes,' explained Mr. Hamer. 'The delegates were very interested in the approach we take as an alternative to the formal court process.'

At the start of December, a film crew making a television series about 'Britishness' for a German TV network visited TPO head office as part of the programme concerning home ownership in the UK. Interviews were held with Mr Hamer and members of the initial enquiries and case officer teams.

'Communicating with the British crew making the film for German TV was easier than discussing matters through an interpreter with the Chinese delegation but it was interesting to see so much international focus on how we do things.'