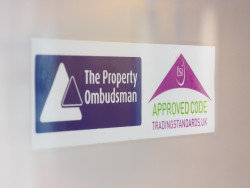 The Property Ombudsman Scheme (TPO) has launched a new national campaign with the Chartered Trading Standards Institute (CTSI) to tackle lettings agents that are breaking the law by not displaying their fees.

The joint campaign will initially target agents operating in Swansea and Dorset, who will be required to provide TPO with photographic evidence to demonstrate they are complying with the law by displaying their fees in both the branch and on their company website.

Any agent that fails to submit evidence will be referred to Trading Standards for further investigation.

The campaign was originally announced at this month’s TPO’s Conference, where Katrine Sporle, Property Ombudsman, revealed the scheme would be working closely with Trading Standards Officers, who have the powers to impose fines of up to £5,000 on any letting agent that fails to display its fees.

More than 85% of all UK letting agents are signed up with TPO and following the industry’s only CTSI-approved Lettings Code of Practice, which clearly states that agents must display their fees in accordance with the 2015 Consumer Rights Act[1].

Gerry Fitzjohn, TPO’s Board Chairman, said: “We want our agents to lead from the front. There can be no excuses. We’re zero tolerant on this issue. Letting fees are under the spotlight and firms would be well advised to get their house in order to ensure they comply with the law. Our joint aim with this campaign is to improve compliance within the industry and raise awareness among consumers so more landlords and tenants ask about fees before they choose their letting agent.”

The CTSI represents Trading Standards professionals across the UK, and runs the Consumer Codes Approval Scheme, which has approved TPO’s Sales and Lettings Codes of Practice.

Adrian Simpson, the CTSI’s business education and consumer codes expert, said: “Agents signed up with The Property Ombudsman scheme have shown that they are willing to commit to the highest levels of consumer protection by following the scheme’s CTSI-approved Code of Practice. We fully support TPO’s efforts to improve industry compliance and any agent that has failed to display their fees up until now must act. We are aware of Trading Standards Officers taking serious action against those that fail to comply."

The campaign will publicise the growing number of cases where Trading Standards Officers have successfully imposed the maximum penalty of £5,000 on lettings agents for failing to display their fees.

Katrine Sporle, Property Ombudsman, said: “As Ombudsman, my primary focus is that agents should be clear and transparent in their dealings with consumers. Agents that display their letting fees demonstrate to consumers that they are operating to a high standard, complying with the law and TPO’s Code, and are open in their communication. As highlighted in TPO’s Annual Report, poor communication is one of the key root causes of consumer complaints. Displaying fees can only help reduce complaints and raise standards.”

[1] TPO’s membership terms require that all agents are compliant with the law and the scheme’s Code of Practice, which clearly states in Section 1m that all agents must display their fees.