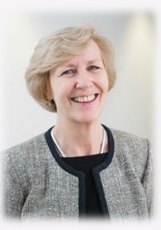 The Property landscape is changing and TPO is changing with it. Katrine will look back over the main events of 2019 and look forward to the significant policy, legislative and redress reform  developments which will affect the sector going forwards.

Katrine Sporle CBE took up her current post as The Property Ombudsman on 1 November 2015.

Previously, Katrine was Chief Executive of the Planning Inspectorate for England and Wales (2003 – 2011), which involved being responsible for all aspects of the Government Executive Agency, 1000 members of staff and a £60m budget.

Katrine was Executive Director and Chapter Clerk at Salisbury Cathedral (2011 – 2015) where she reviewed the Cathedral Master Plan and led a successful HLF Bid for the re-display of the Magna Carta during the 800th Anniversary celebrations.

Prior to that, Katrine was Chief Executive of Basingstoke and Deane Borough Council for eight years.  She provided inspirational leadership to develop the potential of the Borough as a whole, gaining a reputation for economic, cultural and social success.