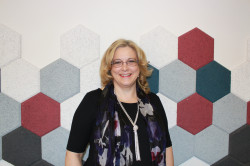 From October 2020, Rebecca Marsh will take up the role of Ombudsman at The Property Ombudsman, taking over from her predecessor Katrine Sporle CBE, whose five-year contract comes to an end on 31st October.

From October 2020, Rebecca Marsh will take up the role of Ombudsman at The Property Ombudsman, taking over from her predecessor Katrine Sporle CBE, whose five-year contract comes to an end on 31st October.

Rebecca Marsh is currently Chief Ombudsman at the Legal Ombudsman and was previously the Deputy Ombudsman and Executive Director of Operations and Investigations at the Parliamentary and Health Service Ombudsman.  Rebecca brings an extensive range of senior level experience and understanding of complaint handling and investigation spanning 17 years. Her career has had a real focus on, and demonstrates her passion for, working with the industry and stakeholders to support improvement.

Rebecca’s role as the new Property Ombudsman is to impartially review complaints made by members of the public against agents, based on the evidence submitted.  The aim is to promote a resolution in full and final settlement of a complaint. Where the Ombudsman is satisfied that the actions of an agent have disadvantaged a complainant, and taking into account relevant parts of the TPO Codes of Practice, she will determine appropriate redress.

During Katrine’s term of office, TPO has dealt with an increase of enquiries of 87% and an increase of formal complaints of 55% demonstrating the increasing demand on the role as well as expansion of TPO’s jurisdictions.

Baroness Diana Warwick, Chair of the TPO Board, commented "Selecting the Ombudsman is a key responsibility of the TPO Board.  We are truly delighted to appoint Rebecca Marsh to this post. She has a breadth and depth of knowledge and experience of both the Ombudsman role and the sector.  Rebecca’s appointment will enable The Property Ombudsman to continue to influence stakeholders and to raise standards in the industry.”

Email: This email address is being protected from spambots. You need JavaScript enabled to view it.

What is The Property Ombudsman?

The Property Ombudsman (TPO) scheme offers an independent and impartial dispute resolution service to consumers who have been unable to resolve their disputes with a registered agent. The scheme was established in 1990. The Ombudsman can provide redress to place the consumer back in the position they were before the complaint arose, achieving a full and final settlement of the dispute and all claims made by either party. Where appropriate, the Ombudsman can make compensatory awards in individual cases up to a maximum of £25,000 for actual and quantifiable loss and/or for aggravation, distress and/or inconvenience caused by the actions of a registered agent.

TPO is funded through membership subscriptions and case fees and is free to all consumers.

Whilst TPO charges registered agents an annual subscription, the Ombudsman is accountable to the TPO Board which is chaired by a member of the House of Lords and with the majority of its members being independent from the industry.

The Ombudsman is not a regulator and does not have the authority to take regulatory or legal action against a registered agent.

Awards made by the Ombudsman in 2019 were paid by agents to consumers in 98% of cases. In the few cases where awards remain unpaid, agents are referred to the TPO Compliance Committee, which has the power to expel agents from the scheme. Expelled agents are reported to the appropriate authorities who have the power to ban agents from carrying out agency business.

If TPO becomes aware that an agent under investigation has ceased trading, complainants are promptly informed and, where an award is made, are provided with the necessary documentation to make a claim against that company. TPO’s agreement with the Property Redress Scheme, means that not only will expelled agents not be able to register for any form of redress, but any new company set up by the same directors will not be accepted for redress membership, until the Ombudsman’s award is paid.

The Ombudsman's Terms of Reference, Codes of Practice, Consumer Guides and other documents about the operation of the scheme are available on our website (www.tpos.co.uk), together with previous annual and interim reports, case summaries, further explanation of governance arrangements and a full list of registered agents.

For more information about TPO, please visit our website at www.tpos.co.uk