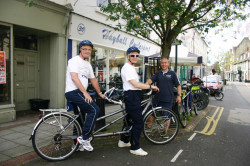 A national event by estate agents to help the homeless has been launched with the help of the Ombudsman and the Chairman of the Board.

The Property Ombudsman, Christopher Hamer, and Bill McClintock, chairman of the company that operates the ombudsman scheme, borrowed a tandem from Hayball Cyclesport in Winchester Street, Salisbury, so they could show joint support for a 3,000 mile charity bike ride around Britain.

The event will be joined by many estate agents during different stages as it progresses around the country throughout August after starting in Exeter.

'The Estate Agency Foundation has been helping charities for the homeless for many years and goes largely unsung outside the property industry,' explained Mr Hamer.

'It's an important initiative and this year's target is to raise £150,000, much of it through the cycle ride, and increase public awareness of the EAF and the charities it supports. We are grateful to Graham Hayball for loaning the tandem to help the event.

'One of the lead participants, Sean Newman, was almost killed during a cycle ride across the United States two years ago and his bravery in joining this event for the whole 3,000 miles deserves recognition, too.

'It was the least Bill and I could do to arrive in Exeter with our tandem and support the first stage. We didn't ride all the way there, though!'

Graham Hayball, of Hayball Cycles in Winchester Street, Salisbury, loaned the tandem for the event – and some practice sessions beforehand.

'I think it is a very worthwhile event and it's also good to see the tandem effort from Christopher and Bill,' he added. 'They got off to an amazingly good start with few wobbles and were quickly into a steady pace. It's a great way to enjoy a pedal-powered trip and one that's becoming increasingly popular.'