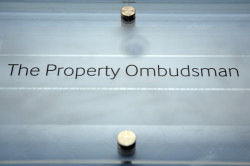 Don't miss out on our conference 'Raise your Standards' which is at The National Motorcycle Museum on 14 October 2015. Please visit the website to purchase tickets

The TPO Codes of Practice are mandatory for all members who are entitled to display the TPO logo and who offer estate/letting agency services.

Should a complaint be made against your company, agents are reminded of their obligation to co-operate with any investigations by the Ombudsman being conducted in accordance with his Terms of Reference.

Cases of non-compliance are taken very seriously and are dealt with by the Disciplinary and Standards Committee (DSC) of the TPO Council. The DSC was established by the TPO Council to deal with the small number of member agents who breach the relevant Codes of Practice and/or fail to meet their obligations as TPO members in other ways.

The Ombudsman refers cases to the DSC where he has found a serious breach of the Codes of Practice or where an agent fails to pay an award.  A range of disciplinary action can be taken including expulsion from the Ombudsman scheme.

Agents are reminded that they cannot avoid paying awards by jumping from one scheme to another. Under the guidance of the Department for Communities and Local Government, the three approved redress schemes will not accept into membership any agent that does not meet its obligations to another scheme.

This means if an agent is expelled from TPO membership, they will be unable to join another redress scheme until they have met their obligations to TPO.  Meaning, if they continue to trade without membership to a redress scheme, they would be doing so illegally because it is a mandatory requirement for both sales and lettings agents to belong to a redress scheme.

Once an agent pays an outstanding award, they are free to join another scheme.

Here, FixFlo has provided a simple breakdown and infographic to explain the changes:-

2. Section 21 Is No Longer Just Procedural

The acts or omissions of a landlord or their agent can prevent a section 21 notice from being validly served for up to six months.

3. The Key To Compliance Is Process

With a check list of information to be provided to a tenant and a clear time limited repairs process set out you should get set now to avoid business risk in the future. 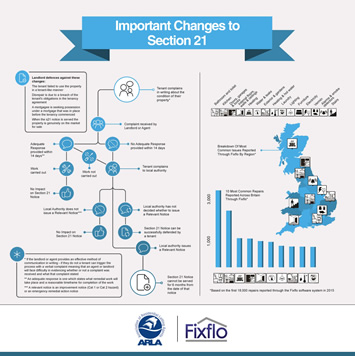 The aim of the ADR Regulations is to provide consumers with access to quality, independent and approved ADR schemes where the trader has been unable to resolve the complaint directly with the consumer. For many sectors (such as the retail sector) this presents a significant change. However, where a sector is already subject to regulation relating to redress arrangements (such as estate, letting and management agents) the changes will be minimal.

TPO is pleased to announce that following a thorough audit of our governance arrangements and complaint processes, the Chartered Trading Standard Institute (CTSI) and the National Trading Standards Estate Agency Team (NTSEAT) have appointed TPO as an ‘approved ADR Scheme’ under the ADR Regulations.

This approval is in addition to CTSI’s accreditation of TPO’s Codes of Practice under their Consumer Codes Approval Scheme and TPO’s accreditation by the NTSEAT and the Department for Communities and Local Government, as an approved Estate Agent and Letting and Management Agent Redress Scheme.

To gain this approval, we were required to demonstrate that we held the necessary experience to deal with property disputes, that our governance structure provided the framework for independent ADR resolutions to be made and that those making the decisions did not possess any conflict of interest or were employed or directly remunerated by a party subject to the Ombudsman’s jurisdiction.

As a result of TPO’s approval the Ombudsman’s Terms of Reference and TPO’s Codes of Practice will be amended as follows:

The ADR Regulations require that the Ombudsman’s new Terms of Reference allow a complainant 12 months from the date of an agent’s final viewpoint letter to refer the matter to TPO. This change came into effect on 20 July 2015.

From 1 October 2015, TPO agents will be required under the ADR Regulations to advise complainants of their TPO membership, TPO’s contact details and the 12 month timescale for referral to TPO. TPO’s Codes are currently being updated to reflect the ADR Regulations along with the requirements of other legislation such as the Consumer Rights Act 2015. The new Codes will become effective on 1 October 2015 and confirmation of the changes will be circulated ahead of that time.

There will also be further opportunity to discuss the new Codes during TPO’s first ever Conference on 14 October 2015.

I trust you will agree that this further accreditation underlines the fact that your membership of TPO and adoption of TPO’s Codes shows your commitment to the highest standards of consumer service within the property sector.

Changes to the Reinstatement Process

From the 1st October 2015, members who do not pay as their membership expires will be terminated from membership two months from their renewal date.

The invoice and any subsequent chase letters that are issued will confirm that Agents may only reinstate (without charge) after initial non-payment for 4 weeks after the original renewal date. To do so agents will be required to recomplete an application form and provide a copy of professional indemnity insurance.

Should agents not pay fees within the reinstatement period their membership will remain ceased and if they wish to re-join this will incur a re-joining fee of £50 plus VAT (in addition to the annual fee). This is to be returned with a completed application form and the relevant supporting documents as detailed on the application form.

It is essential that TPO maintain accurate records and Agents comply with the requirements of the law. Agents are reminded that it is a legal obligation to be registered with an Approved Redress Scheme – re-instatement will ensure continuous coverage – ceased membership means that Agents will not meet legal obligations.